Almost every village has a folk-goddess, generally at the entrance to it. This goddess will be a protectress if appeased and a scourge if displeased. One such goddess commonly worshiped in the country is Śītalā.[1] who is common in North India, especially in Bengal. She is the deity of smallpox. She is generally worshiped in a crude stone with a painted human face. She can cure smallpox if pleased or bring it on if displeased. 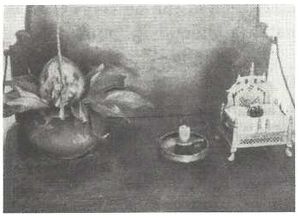 Tāntrik works describe her as black-complexioned, two-armed and riding on a donkey naked. She wears a winnowing basket on her head and holds a broom and a pot of water in her two hands. A variant form of hers is described as red-complexioned, three-eyed and four armed. In these four arms, she carries a skull-cup, hand-drum, spear and sword. Her hair resembles a blazing fire and she is seated on a lotus.

In South India, she is worshiped as Māriyamma. Other forms are Ā-i of Assam and Thākurānī in Orissa.