In the Viṣṇusahasranāma[1] the word as applied to Viṣṇu is used in two senses: 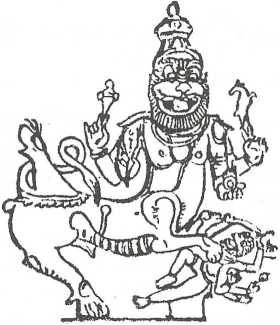 According to the legends recounted in the Śaivāgamas, śarabha is a mythical animal with eight legs and two heads that attacks and kills lions.

When Naṛsimha, after killing the demon Hiraṇyakaśipu, started roaming about in the forest, striking terror in the hearts of all, Śiva assumed the form of a śarabha and killed him. Being liberated from the lion’s body, Viṣṇu is said to have thanked Śiva and returned to his abode, the Vaikuṇṭha. This is the version believed by the followers of Śiva to deride the followers of Viṣṇu.

The Śarabhopaniṣad[2] describes Viṣṇu as Śarabha who shines in the hearts of the souls and bestows liberation upon them.

According to the Uttamakāmikāgama,[3] a text belonging to the Śaivāgama group, Śarabha is a huge & monstrous form of Śiva, by appeasing whom, one can destroy one’s enemies.

Iconographical works describe him to be with a body which is partly animal, partly a bird and with two heads wearing a big crown.