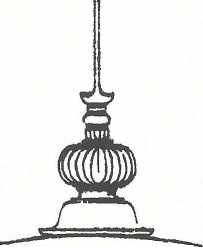 These are the technical terms used in temple architecture. The crown of a Nāgara style of a temple (with curvilinear towers found mostly in North and North-east India) is called āmalaka for the simple reason that it resembles an āmalaka fruit (myrobalan) in shape.

It is a solid ring stone with a cogged rim. It forms the crown of the main śikhara (dome) as also subsidiary śikharas. It clasps the veṇu or the central shaft of the structure. It is not found in the Drāviḍa temples.

Sometimes, above the usual āmalaka, there may be a smaller one of similar shape. In this case, the lower one is called āmalasāra and the upper (smaller) one āmalasārī. The āmalaka is the architectural symbol of the celestial world.