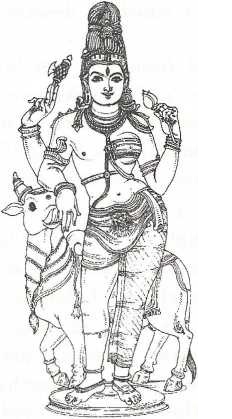 Śiva, also called īśvara, is the third deity of the Trinity. He is generally worshiped in the form of the liṅga.

Etymologically both the words, Śiva and liṅga, mean ‘that into which the universe dissolves.’ Śiva is thus the ultimate source of all creation.

In the Puraṇa-s, the śakti or power by which God creates, sustains and dissolves the universe is pictured as a female deity, the consort of God. Śiva’s consort is Pārvatī. Ardhanārīśvara is one of the several forms in which Śiva manifested himself.

Some scholars opine that the form might have been evolved to bring about a compromise between the cults of Śiva and Śakti.