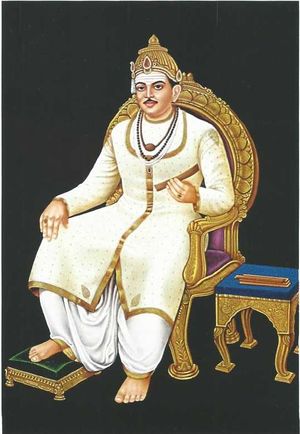 Vīraśaivism is one of the important aspects of Śaivism. It is more popular in Karnataka and owes its development and popularity mainly to Basaveśvara. Basaveśvara was also called Basavanṇa or Basava and flourished in the 12th century. Though attempts have been made to project him as the founder of this faith, others in the tradition have not accepted this, as quite a few teachers of the same school have preceded him.

The socio-political condition of the people of Karnataka during the latter part of the 11th and early part of the 12th centuries was ripe for the advent of a rebel-reformer, and Basaveśvara fitted into it admirably. The brāhmaṇas with the strength of their learning in the traditional lore, secular sciences and their cultural roots, wielded enormous power in both the political field and in the social setup.

The caste system had an iron grip over the society and persons of lower castes enjoyed few privileges. Their colossal ignorance and arrant superstition had created deified spirit, the fear of which had led to several superstitious practices. Further, women in general were always treated as inferior to men. Jainism, as a result of constant conflict with the various cults of Hinduism, had lost its popular appeal.

Basaveśvara was born as the son of a śaiva brāhmaṇa couple - Mādirāja and Mādāmbā at Bāgevāḍi in the Bijapur district of modern Karnataka. Since he was born after much austerity and prayers to Vṛṣabha or Nandinātha (the bullmount of Śiva) he was also christened as ‘Basava’ (= vṛṣabha).

Though brought up in the Vedic brāhmanical tradition, he could not reconcile himself to many of the customs that occurred during his times, like immolating animals in Vedic sacrifices. Most unwillingly and under protest, he underwent the upanayana ceremony (the ceremony of investiture with the sacred thread called yajñopavīta). He received a good education, which he assimilated well due to his unusual powers of comprehension.

However, he could not bring himself to accept the various rituals of Vedic origin. Nor could he tolerate the injustice being heaped upon the lower caste groups by the upper classes. This gradually led to rift between him and his parents and the elders of the contemporary society.

His parents soon passed away, leaving him an orphan. He thought he was now free to come out of the clutches of brāhminical orthodoxy, which he did, by tearing off the sacred thread that symbolized it. He then went to Kappaḍi Saṅgama, a holy place situated at the confluence of the rivers Malaprabhā and Kṛṣṇā. He settled down near the temple of Saṅgameśvara and started his spiritual quest through the worship of the Śivaliṅga there. A holy man īśānya-guru by name, is said to have given him shelter there.

It is not known how long Basaveśvara stayed at Kappaḍi Saṅgama. Once Śiva appeared in a dream and commanded him to go to Maṅgaliveḍa and meet the King Bijjala. He did so, though most unwillingly. Bijjala of the Kalacuri race, who had been a governor of the Cālukyas head, gradually grown in power and had usurped their kingdom during the period A.D. 1157-62. Being impressed by the appearance and personal magnetism of Basaveśvara, Bijjala appointed him as an employee in his treasury under Siddha Daṇdādhipa. After the latter’s demise, Basaveśvara took over as the chief. Soon after this, he got married to Gaṅgādevī and Nīlalocanā, daughters of two high-ranking officers.

His hospitality and generosity soon attracted all and sundry to his house in the guise of devotees of Śiva. Though sometimes, he had to suffer their quixotic behavior, he would do so with infinite patience and cheerfulness. Sometime later, Basaveśvara shifted to Kalyāṇa, the capital of Bijjala. Though he worked honestly and efficiently, rumors were floated by persons inimical to him. They gossiped about him misusing the state funds for entertaining his personal guests. These rumours gradually soured his relationship with Bijjala. His attempts of bringing about a social revolution that would transcend caste barriers, accord an equal status to women and stress the importance of honest physical labor as an integral part of religious or spiritual life added fuel to fire.

These reforms led to a great commotion and social unrest, resulting first in the plucking out of the eyes of the fathers of the couple by Bijjala and then in the assassination of Bijjala himself by the hands of Basaveśvara’s followers as a reaction. In the melee that resulted, Basaveśvara escaped to Kappaḍi Saṅgama; and later, he voluntarily drowned himself at the confluence of the rivers there.

Basaveśvara, though a social revolutionary, was basically a spiritual aspirant who rose to saintly heights. His devotion to his Lord, ‘Kuḍala Saṅgamadeva (Śiva),’ was as intense as his keen intellect. He used everything he had: his wealth, possessions, power and good name in the service of his Lord and His devotees. He was a byword for magnanimity and generosity. Neither wealth nor power, nor even happy family could deflect Basaveśvara from his chosen path :

He brought about reforms by founding an institution called ‘Śivānubhava-maṇṭapa’ (‘religious house of experience’). This was, perhaps, the birthplace or cradle of Vīraśaivism as it is known today. It was a spiritual as well as a social institution organized by Basaveśvara and presided over by Allama Prabhu, the greatest saint of the time. It acted as a nucleus, around which persons of all ranks and professions, including women, gathered to take part in the discussions that ranged from the most sublime spiritual truths to social problems, norms and conduct.

Social Reforms Brought About By Śivānubhava-maṇṭapa[edit]

The social revolution that was initiated by this movement developed from a ripple to gigantic waves resulting ultimately to the marriage of a brāhmaṇa girl to a Harijan (untouchable) boy since both the families had embraced the Vīraśaiva cult.

Basaveśvara has left behind him a large number of his sayings as ‘vacanas.’ The vacana is a class of Kannada literature, midway between prose and poetry, and couched in the common language of the masses. The topics dealt in it range from the deepest philosophical reflections to simple ethics or problems and parodies of the day-to-day life.

His philosophy may be summarized briefly thus :

There is no doubt that Basaveśvara was one of the brightest luminaries that adorned South India, especially the Karnataka region, in the 12th century.