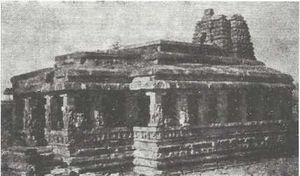 Aihole is a small town in the Bijapur district of northern Karnataka.

One of the ancient group of temples built out of stone and preserved as archaeological monuments is at Aihole. The Durga temple is a major building of this group. The temple is situated inside a structure that resembles a ‘durga’ or fort. Hence it is known as Durga temple though the temple is not dedicated to the goddess Durgā.