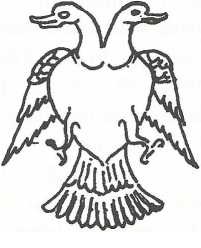 The Gaṇḍabheruṇḍa, a double-headed eagle, has been the State symbol of many royal dynasties especially in South India. Prominent among them are the emperors of Vijayanagara and the kings of Mysore. It still continuous to be the symbol of the Karnataka State.

According to the archaeologists and historians, the bird signifies peace, progress and power. The Purāṇas indicate that Viṣṇu as Gaṇḍabheruṇḍa subdued Śiva as Śarabhaas after Narasimha was conquered by Śarabha.[1]

Evidence of Gaṇḍabheruṇḍa throughout history[edit]