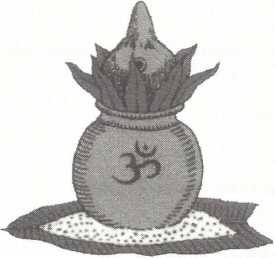 A ghaṭa or a mud-pot is an important accessory in many religious rituals.

When ghaṭa is filled with water and decorated with certain leaves and coconut, it becomes fit for any deity for being ceremonially invoked into it. Such a ghaṭa is also called as a kumbha or a kalaśa. It is one of the four receptacles of divinity. The other three are the:

As a Motif in Temples[edit]

It is sometimes used as an art motif which indicates auspiciousness and abundance. It is found on the pillars and doors in temples.

A ceremonially installed pot is an essential part of the worship of the Mother Durgā during this festival.

According to the works on Haṭhayoga, ghaṭa or ghaṭāvasthā is a state of prāṇāyāma. In this state, the two prāṇas or vital airs are in a balanced state which leads to the union of the jīva (individual soul) with Paramātman (the Supreme Soul). These two vital airs are:

According to the philosophical treatises, the word ‘ghaṭa’ is sometimes used to indicate the body. It indicates the body as fragile as a mudpot.