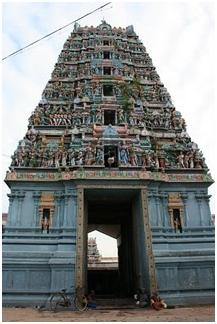 Maangaadu is a small village located on the outskirts of Chennai near Poonamallee.

As per the legend, one day in Kailash, Parvathi Devi playfully closed the eyes of Lord Shiva from behind, with her palms. As a result of this, the whole universe was surrounded with darkness and all the living beings suffered. Lord Shiva became angry and the Goddess craved for his pardon. Lord Shiva guided her to the earth and asked her to perform a severe penance to join him again. As per the God’s instructions she came down to earth and reached this place of dense Mango grove called Maangaadu[1]

She started her rigorous penance here in the standing posture on the Panchagni (Fire). She stood one legged on Panchagni with right leg folded. She was holding her right hand raised above her head holding the Japamala (Rudraksha). Even today we can see this Moorthi of Sri Tapas Kamakshi at Maangaadu. This Panchagni Sadhana is not an easy task. This Panchagni penance is performed to kill five evils which dominate people and lead them into misery. The five evils are Kama (Desire), Krodha (Anger), Lobha (Greed), Madha (Ego) & Maacharya (Attachment). If one wins over all these five they can attain the supreme bliss.

Lord Shiva, who was happy with her penance, came down to earth to marry her. He gave dharshan to her in Maangaadu and married her at Kanchipuram, where even today they both bless the devotees at Ekambareswarar Temple. There is a temple for Lord Shiva where he came down to meet her. This temple is Velleeswarar Temple located nearby Kamakshi Amman Temple. Also there is another temple for Lord Vishnu (Vaikunda Perumal temple) in Mangadu. It is said that Lord Vishnu, being the brother of Goddess Parvati came for the wedding with Kanayazhi (gem stone ring) for Parvati as his gift (சீர் வரிசை) is still waiting here, as the wedding didn't happen at Mangadu.

Even after Goddess left the place, the power of the Agni didn’t subside, out of which the whole place in and around Maangaadu suffered with unbearable heat and the Ugram of the Goddess. Sri Aadhi Sankaracharya, during his visit here, installed an Ardhameru Sri Chakra and brought down the heat and ugram of the place. This Sri Chakra is rare and one of its kind in the country and not seen anywhere else. Even today, no abhishekams are performed to the Sri Chakra as it contains rare herbs. Only Kumkuma Archana is performed that too only to the Sri Chakra and not the idol, as the powers of Sri Kamakshi Amman has been instilled in the Chakra by Sri Aadhi Sankaracharya.

The idol Sri Aadhi Kamakshiamman made of Panchaloha (5 metals) was installed by Sri Kanchi Paramacharya Swami in the later years. Six weeks worships are very popular here. The devotee who has some prarthana or wish can choose any one day of the week and to visit the temple along with 2 lemons, of which one will be retained at the temple and the other one has to be taken back home. Again the following week, on the same day, he or she has to carry the old lemon from home along with 2 other fresh lemons. Like wise, if one visits on the same day for six weeks continuously, the Ambaal grants the wishes of the devotee.

Maangaadu is just 24 kms from Chennai city and is located off the Chennai Bangalore highway on the way from Poonamallee to Kunrathur.