The purāṇas describe how Indra, the king of the gods, who had been languishing after a particularly humiliating defeat by the hands of asuras or demons, was able to regain his sovereignty due to the power of the amulet tied on his hand by his queen Sacīdevī after some austerities. This was the beginning of the Rakṣābandhana festival. 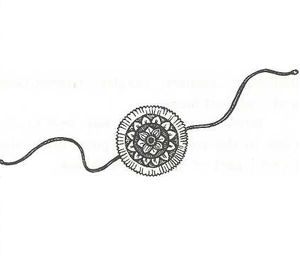 The rakṣās or rākhīs are prepared out of golden or yellow threads with amulets. They are first worshiped and then tied on the right hand. This tying may be done by priests who should be offered some money as dakṣiṇā[1] or by one’s sisters or even by sisterly ladies. The brothers should offer them some presents on the occasion.

The famous mantra uttered on this occasion seeks protection from it. It is:

‘I tie on you that whereby Bali, the very powerful king of demons, was bound. O protective amulet! Don’t slip off, Don’t slip off.

On this day, people of all religions on the west coast offer flowers and coconuts to the sea. It is a prayer and a request to make the sea voyage for merchant-vessels, safe and smooth.