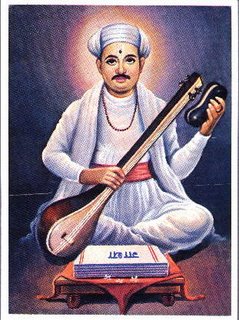 Tukaram or Tukoba, constantly sang the praises of lord Vitthala, or Krishna. It was the constant singing about God which led Tukaram to compose his abhangs. It is these abhangs for which Tuka is most famous. The abhangs are unique in the world of literature. They are often called poems, but they don't have the artful imagery associated with poems. The abhangs express Tuka's feelings (whether elation or frustration) and philosophical outlook. During his 41 years, Tuka composed over 5,000 abhangs. Many of them speak of events in his life, which make them somewhat autobiographical. Yet, they are focused on God and not Tukaram.

He faced varieties of difficulties with astonishing patience. He refused diamonds and opals offered by Shivaji Maharaj himself. His devotional songs are an invaluable contribution to Marathi spiritual literature.