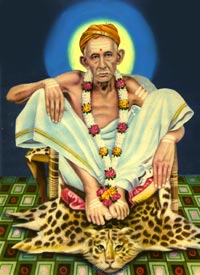 His Holiness Sadguru Shri Siddharudh Swamiji hailing from Hubli city of Karnataka State devoted and dedicated his entire life.(A.D. 1836 to A.D. 1929) for the noble cause of soul-stirring dynamic spiritualism and universal brotherhood. Shri Sadguru Sidhharudh Swami was the incarnation of Lord Shiva. In the galaxy of his followers and diciples stand out the names of enlightened Maharaja's of the erstwhile States (Sansthans). Such as Sandur, Kolhapur, Akkalkot etc. National leaders of freedom movement like Lokmanya Tilak and Mahatma Gandhi had sought his blessings.