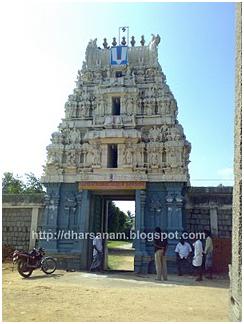 Thiru Aayarpaadi is a small village located 3 kms from Ponneri, near Chennai. This village has a beautiful temple for Lord Krishna called Sri Kari Krishna Perumal, on the banks of the Aarani River. The Lord here is Swayambhu Murthy (self evolved). In Thamizh ‘Aayarpaadi’ means shepherd village, the place where Lord Krishna grew up. This village also has the same name, as the Lord here gives dharshan as a Shepherd.

The main deity Sri Kari Krishna Perumal is seen here in human form. Generally in Vishnu temples one can see the Lord with 4 hands holding Sangu (Conch) and Chakra (Wheel). But here the Lord is seen as a Yadhava (shepherd), with His right hand holding a shepherd’s whip and left hand rested on the hip. The Lord has Amrutha Kalasam (bowl containing celestial nectar) on His head. Sri Kari Krishna Perumal and the temple are facing north. It is said that Sage Bharadhwaja has worshipped the Lord here.

There is an ant hill present inside the temple. Usually, we can see such ant hill only in Amman temples. But this is the only Vishnu temple which has an ant hill. The main deity is said to be evolved from this ant hill only. There is an interesting story behind this temple.

Ages back a cow belonging to a villager used to graze around in the forests here. One day the master of the cow saw the cow pouring its milk in a bush without any one actually milking it. The master who got confused went and saw the place along with the villagers. There was an ant hill amidst the bushes. They started demolishing the ant hill curiously. While digging out they saw this idol of Lord Krishna showing up. While digging further, it is said that, Lord Krishna moved his leg a bit and stood slanting to avoid being hit by the crowbar. But one of the crowbars hit Him on his shoulders. The villagers took out this beautiful idol of Lord Krishna which stood tilted, holding a whip on His hand.

It is said that the mark of the crowbar still remains on the deity and sandal paste is applied on it regularly, to heal the wound. The villagers installed the idol here adjacent to the ant hill itself. The Lord does not have any Peetam or base and seen standing on the floor, in a tilted posture with one of his leg a bit away. Sri Garuda (His carrier) is seen in front of the sanctum. Ancient Chozha king, Karikaal Chozha II has built this temple for Lord Krishna and hence the God here came to be known as Sri Kari Krishna Perumal.

Goddess here is Sri Soundaravalli, having a separate shrine outside the sanctum, facing east. There is also a separate shrine for Sri Rama here. Another rare feature of this place is the Shiva Vishnu meet, which is celebrated once in a year. It is said that there were 2 Rishis performing penance nearby. They planned to pray Lord Shiva and Lord Vishnu respectively and both gave dharshan to them simultaneously. Marking this occasion, a festival called Hari – Haran Sandhippu Urchavam (‘Shiva - Vishnu Meet’ festival) is celebrated annually near this temple. This is probably the only place where these 2 Gods meet.

There is a 16 pillar Mandapam outside the temple in front of the Raja Gopuram. A stone slab above these pillars form a firm ceiling for the Mandapam. All the 16 pillars are in a slanted position looking as if the whole structure is falling. But actually the whole Mandapam is brilliantly made in a tilted form, for the reason that the main deity here is standing in a tilted position. All the pillars of this Mandapam have exquisite carvings on them. Sri Kari Krishna Perumal is worshipped here by childless couples to be blessed with a child. It is considered as Prarthana Sthalam (temple that fulfils wishes) for the childless. It is believed that Perumal fulfils their prayers.

The Sthala Viruksham (temple tree) is Magizha Maram and the Theertham here is called Santhaana Pushkarani. A temple that’s too wonderful to miss.