Whether religion is the opium of the masses or not, Lord Veṅkaṭeśvara of Tirupati has certainly been casting a hypnotic devotional spell on lakhs of devotees for centuries. Tirumala is the range of seven hills forming a part of the Eastern Ghats. The main temple is on the seventh hill at a height of 840 metres or 2800 feet above the sea level. Tirupati is the township at the foot of the hill.

The hill which is supposed to be a piece of the Meruparvata has several names such as: 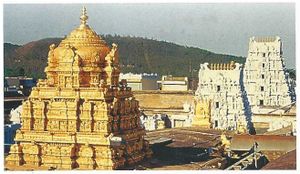 However, the original name was Veṅgaḍa, a Tamil word, in course of time it was given a touch of Sanskrit to Veṅkaṭa and the god on this hill became Veṅkaṭeśa or Veṅkaṭeśvara or Veṅkaṭanātha. Since the hill was also known as Śrīgiri, the lord of the hill became Śrīgirivāsa or Śrīnivāsa also. Bālājī is another well-known name by which he is known. 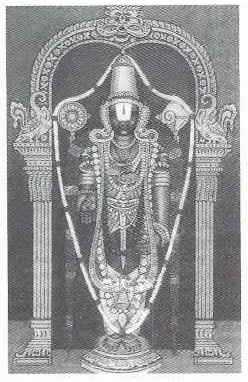 Origin of Image of Veṅkaṭeśvara[edit]

The stone image of Lord Veṅkaṭeśvara is believed to be svayamvyakta or self-manifested and not man-made. A great devotee of God named Raṅgadāsa and Gopīnātha, an another devotee, are said to have discovered this image which had been partially buried under the earth and redeemed it. Originally it might have been in the open and gradually the garbhagṛha[1] and other parts of a regular temple might have been added by stages spread over some centuries.

If the local legends have to be believed, a king Toṇḍamān[2] by name seems to have built the first structure to protect the image. The antiquity of the image is further proved by the references of it in the ancient Tamil work Silappadikāram[3] and by the Ālvārs[4] in their pāśuras[5] numbering 203.

The peculiarities of of garbhagṛha is as follows:

Since it does not confirm to any of the rules laid in the works on Iconography or the descriptions given in the dhyānaślokas[8] of the various aspects of Viṣṇu, the belief that it is svayarhvyakta is strengthened.

The peculiarities of the image is as follows:

A special feature of the decorated image is the nāma or tripuṇdra, the well-known caste mark of the Śrīvaiṣṇava sect. It is prepared out of paccakarpura[12] and kasturi,[13] and covers the two eyes, the whole of the nose and extends on the forehead up to the crown. Applying this type of nāma is said to have begun in A. D. 1465.

The practice of offering bilva leaves and decorating it with a sari has given rise to doubts regarding the deity it represents. Guesses galore have made it an image of Viṣṇu, Śiva, Devi, Subrahmaṇya or Harihara. As mentioned before, it is Rāmānuja who is said to have finally settled the disputes by declaring that it is that of Viṣṇu.

Other Images of Tirupati Temple[edit]

There are other images in the sanctum as follows:

Inside the main temple campus, there are small shrines dedicated to Varadarāja and Narasimha,[14] Rāma and Rāmānuja also. It is interesting to note that in one of the old rooms, several copper plates containing the songs[15] of Aṇṇamācārya[16] on Lord Veṅkaṭeśvara were discovered. These songs are now being printed and widely used.

Type of Worship in Tirupati Temple[edit]

In this temple, it is the Vaikhānasa Āgama system of worship and rituals that is being followed for several centuries. It is contrast to the Pāñcarātra system which is much more common, especially in the Vaiṣṇava temples of South India. Apart from the regular daily worship there are several other rites and rituals like:

Among the various festivals of the temple the biggest and the most impressive is the Brahmotsava, celebrated during the Navarātri festival generally in September/October for nine days. The Rathotsava[17] is held on the 8th day. On the last day, the utsavamṅrti[18] is bathed in the nearby temple-tank known as Svāmipuṣkariṇī or Varāhatīrtha, because of the Varāha temple on its bank. Once in a year, there is a big festival celebrating the marriage of Padmāvatī with Veṅkaṭeśvara. Her processional image is taken on an elephant to the Tirumala temple, where he ‘comes out’ to meet her. The Brahmotsava of this temple is on the ‘birthday’ of Padmāvatī, generally in November/December.

The temple is also famous for its prasāda, sacred offering in the form of laḍḍus[19] which are sold in millions. This Veṅkaṭeśvara temple of Tirumala is not only the most popular but also the wealthiest in the country.

At the foot of the hills is Tirupati, the main city. The temples of Govindarāja, Kodaṇḍarāma and Kapileśvara (Siva) are situated here.

The Govindarāja temple contains the older shrine of Pārthasārathi[23] dating back to the 9th century A. D. and Govindarāja established by Rāmānuja in A. D. 1130. The deity here is a śayānamurti[24] as in the Srīraṅgam temple. It has an impressive gopuram[25] of seven storeys.

Another important temple included in the Tirupati pilgrimage is the Padmāvatī temple at Tiruccānur which is 5 kms.[27] away from the Tirupati town. Padmāvatī, also called Alarmel-maṅgai, is the consort of Lord Veṅkaṭeśvara. Her icon is shown as seated in the padmāsana style and holding a lotus in each of the upper two hands. The lower hands are in the abhaya and varada mudrās giving protection and granting boons.

The ‘Tirumala-Tirupati-Devasthānams’[28] is a huge organisation entrusted with the management of the main temple, allied temples and other institutions. The fabulous income of the temples is being utilized for the welfare of the pilgrims by providing many facilities like rest-houses, free-food, prasāda[29] and transportation. It is also running a university with several academic institutions affiliated to it including an Oriental research institute.