Rudra is a Vedic deity. He has been eulogized in only three suktas of the Ṛgveda out of which two are more explicit.[1] His name appears 75 times. He is also called ‘Śiva’ 18 times.

The various definitions of the word Rudra are: 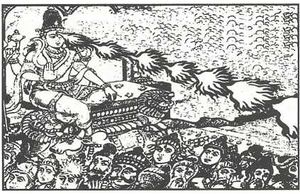 Rudra’s beauteous form has been described in various mantras. It can be briefed as belows:

All the Rudras have their female counterparts or consorts like:

Rudra is also regarded as having created: