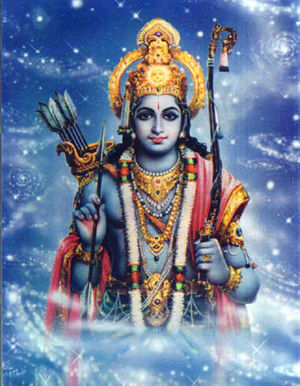 Rama Navami is the day on which Lord Rama, the seventh incarnation of Lord Vishnu, incarnated in human form in the land of Ayodhya. He is the ardha ansh of Vishnu or has half the divinitive qualities of Lord Vishnu. The word “Rama” literally means one who is divinely blissful and who gives joy to others, and one in whom the sages rejoice.

Ram Navami falls on the ninth day of the bright fortnight in the month of Chaitra (April/May) (8 days after Yugādi) and coincides with Vasant Navratri or Chait Durga Puja. Therefore in some regions, the festival is spread over nine days. This day, marking the birthday of Lord Rama, is also observed as the marriage day of Rama and Sita and thus also referred to as Kalyanotsavam.

Bhagwan Rama exemplified the perfect person (maryada purushottam). He was the embodiment of compassion, gentleness, kindness, righteousness and integrity. Although he had all the power in the world, he still was peaceful and gentle.

His reign in Ayodha is referred to as Ramarajya, the epitome of perfect governance. Ayodhya was the capital founded by the king-rishi Manu. During the reign of King Dasharath, Ayodhya reached a period of great prosperity. But Dasharath had one problem--he had no children. Therefore he decided to perform the ashvamedh sacrifice. Elaborate and difficult rituals had to be observed. Rishi Rishyashring presided over the yagya. The performance of this sacrifice was a great event in Ayodhya. At the end, Rishyashring recited a Mantra and made an offering to the fire. Then the gods, gandharvas, siddhas, and rishis present around began to pray to Brahma. During that time Ravana, the king of Lanka, was terrorizing the people, and they were longing for liberation from his menace. Ravana had acquired great power because he had obtained from God Brahma the boon that he would never die at the hands of gods, or gandharvas, or yakshas (demigods) or demons. As he was not afraid of men, he did not care to include men in the list of his potential slayers. So Brahmadev declared that Ravana would die at the hands of a man. Then the gods went to Vishnu for help and requested him that since Dasharath was a glorious king, that He take birth in the wombs of his three queens in four different incarnations of His divinity. When Dasharath's sacrifice came to an end, a shining figure appeared over the sacrificial kund, and offered the king a divine beverage called "payasam", which was to be given to his queens Kausalya, Kaikayi, and Sumitra. In due time, Kausalya gave birth to Rama, Kaikayi to Bharat and Sumitra to Laxman and Shatrugna.

The Sun is considered to be the progenitor of Rama's dynasty, which is called the Solar Dynasty (Raghukula or Raghuvamsa – Raghu means Sun and Kula or Vamsa mean familial descendant). Rama is also known as Raghunatha, Raghupati, Raghavendra etc. That all these names begin with the prefix Raghu is also suggestive of some link with Sun-worship. The hour chosen for the observance of the Lord's birth is that when the Sun is overhead and is at its maximum brilliance. In some Hindu sects, prayers on Ramnavami day start not with an invocation to Rama but to Surya (Sun). Again the syllable Ra is used in the word to describe the Sun and brilliance in many languages. In Sanskrit, Ravi and Ravindra both mean "Sun".

The story of the Ramayan is a classic, eternal, universal message of Dharma versus adharma, of deva versus demon, of good versus evil, as represented in the battle between Rama and Ravana.

Ravana was a brahmin; he was a great scholar who wrote numerous works on scriptural philosophy. He was powerful, dynamic, and beautiful in appearance. As the brilliant, handsome king of Lanka, he had everything one would need to be happy and peaceful. Yet, he was arrogant, egoistic, greedy and lustful. His insatiable desires led him to crave more and more power, more and more money, and more and more ladies to fulfill his every whim.

There is one main difference: Bhagwan Rama’s heart overflowed with divinity, love, generosity, humility, and a sense of duty. Ravana’s heart, in contrast, was filled with avarice, hatred, and egoism. Under Bhagwan Rama’s divine touch, the animals became his devotees and his divine helpers. Under Ravana’s touch, even humans became animals.

Through his noble and divine choices, he teaches the world to choose dharma over Artha (when he leaves for the forest rather than be coronated as King) and to choose Moksha over Kama (when he chooses his kingdom over his marriage).

As a son
Respectfully and lovingly obey your father’s orders. Sacrifice your own comfort for your father’s dignity.
As a step-son
Even when your step mother (or mother-in-law) is not kind to you, even when she clearly dis- criminates against you in favor of her own birth child, do not resent her, do not fight against her. Respect her and her wishes.
As a brother
Remain loyal to your brother. Care for him.
As a husband
Protect your wife. Fight for her protection and her purity. But there are times when one’s divine path must even take precedence over the path of householder. Do not keep the role of householder as the ultimate role.
As a King
Sacrifice everything for your people. Do not worry about your own comfort, your own convenience or your own pleasure. Be willing to put the kingdom ahead of your own needs.

Ravana’s ego led to his own demise, first the demise of his spirit and heart and then the demise of his body. He thought he was the one who ran everything. He thought that he was the “doer” of it all. On the other hand, Bhagwan Rama was always humble, and he never took credit for anything. At the end of the war in Lanka, Bhagwan Rama was giving Sitaji a tour of the city, showing her where all of the various events had occurred. When, they reached the place where he victoriously slew Ravana, he reported it to Sitaji only as, “and this is where Ravana died.” He didn’t say, “This is where I crushed the demon,” or “This is where I killed Ravana.”

Ram Navami is a festival that celebrates the birth of Lord Rama, the son of King Dasharath. It was a joyous occasion in Ayodhya all those centuries ago when King Dasharath's heir was finally born. It was like a dream come true for the king as the lack of an heir had troubled him sorely for many years.

Lord Rama is an Avatar of Lord Vishnu who came down to earth to battle the invincible Ravana in human form. Lord Brahma had been receiving complaints from all the gods about the havoc that Ravana was wreaking on earth, but because Lord Brahma had granted Ravana so many boons, he could not be killed by a god. But Ravana had become so overconfident that he would never expect an attack from a human being. So Lord Vishnu agreed to go to earth in the guise of Prince Ram, the son of King Dasharath and Queen Kaushalya.

The story of Lord Rama as told in the great epic Ramayana is one that most Indians know irrespective of caste, creed and religion. Lord Rama is a legendary figure, the epitome of all that is good and true, the man who vanquished the demon king, Ravana. Lord Rama is not just a hero, but has been given the status of a god by the Hindus. Therefore, it comes as no surprise that his birth is celebrated year after year with great pomp and enjoyment on the ninth day after the new moon in Sukul Paksh (the waxing moon), which falls sometime in the month of April.

The Rāma Navamī vrata is nitya or compulsory for the devotees of Rāma and optional for others. It is one of the highly eulogized vratas in the calendar which can destroy one’s sins and also confer even mukti or liberation.

The vrata commences from the previous night itself with fasting. On the navamī day also the votary has to continue fasting, perform worship and homa to Rāma in an image installed in a specially prepared shrine, do japa of Rāmamantra and keep vigil in the night. After the completion of the vrata he donates the image to an ācārya[1] along with other gifts made liberally.

There are three different types of fasts that can be held on this day:

When eating a single meal during the fast, it may consist of fruits and fruit extracts. Alternatively, if eating a full meal, it can include potatoes made in any form without haldi (turmeric), garlic, ginger or onion, fruits and any type of vegatable. Curd, tea, coffee, milk, and water are also permitted.

Ram Navami is celebrated in a variety of ways ranging from bhajan programs and pujas to ratha yatras and pandal programs.

Bhajan programs are organized both at homes as well as in Temples. During these programs, bhajans extolling the virtues of Lord Rama, Lakshman, Sita, and Hanuman are sung. If in a temple, these programs are often accompanied by Ramayana Katha, in which details of the Ramayana are presented, or chanting of the whole Ramayana. Many people either perform akhanda ramayana pat or just chant sunderkand.

In addition, people clean their homes and put pictures of Lord Rama, Lakshman, Sita and Hanuman on a dais in preparation for the Puja. Flowers and incense are kept before the deities. There are two thaalis kept ready in the puja area. One contains the prasad and the other the items necessary for the puja like roli, aipun, rice, water, flowers, a bell and a conch. The puja begins with the youngest female member of the family applying teeka to all the male members of the family. A red bindi is applied on the foreheads of all the female members. Everyone participates in the puja by first sprinkling the water, roli, and aipun on the gods and then showering handfuls of rice on the deities. Then everybody stands up to perform the aarti, at the end of which ganga jal or plain water is sprinkled over the gathering. The singing of bhajans goes on for the entire puja. Finally, the prasad is distributed among all the people who have gathered.

In Ayodhya, the birthplace of Lord Rama, a huge fair is held with thousands of devotees gathering to celebrate this festival. The fair continues for two days, and rathyatras, carrying the Dieties of Ram, his brother Laxman, His wife Sita, and His greatest devotee Mahavir Hanuman, are taken out from almost all Ram Temples. Hanuman is known for is his devotion to Rama, and his tales form an important part of the celebration. 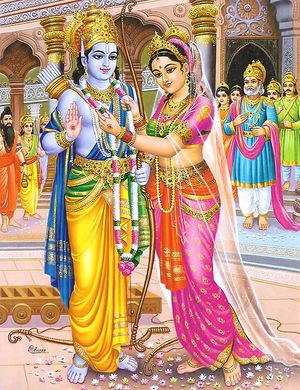 In Andhra Pradesh, Ram Navami is celebrated for 10 days from the Chaitra saptami to the Bahula Padyami that fall in the month of March and April. Temples re-enact the marriage of Lord Rama and Sita to commemorate this event, since this day is also the day they got married.

The Rama Stotra in the Vishnu Sahasranama, say this sloka 3 times as mentioned in the sahasranama.

People visit sacred places associated with Lord Ram during this holy time. Places like Ayodhya, Ujjain and Rameshwaram attracts thousands of devotees across the country. In Rameshwaram, thousands take a ritual bath in the sea before worshipping at the Ramanathaswamy temple. Many places in North India host fairs in connection with the festival, culminating in spectacular fireworks on Rama Navami.