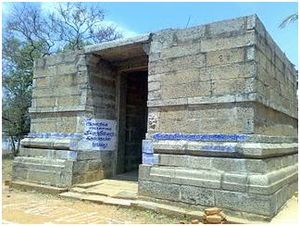 Thirukkachur is a very small village situated about 3 kms from Singaperumal Koil. This village lies on the west side of Singaperumal Koil off the GST Road. There is a small hillock in this village called Oushadhagiri. At the foot hill, there is this stunning, ancient temple for Lord Shiva called Sri Oushadheeswarar. This is a beautiful temple which is said to be built by Kulothunga Chozha, where the main deity is Sri Oushadheeswarar (in Sanskrit ‘oushadha’ means medicine) also called Marundheeswarar and Goddess Andhaka Nivarani Ambaal (also called Sri Irul Neekki Ambaal). This temple is also called as Malai Koil by the villagers.

The entrance of this temple is facing south. There is no Rajagopuram for this temple. Soon after the entrance, there is a stone pillared Mandapam on which wonderful ancient carvings of Lingothbavar, Kamakshi, Pattinathaar, Dhandaayudhapaani etc, are seen. It is said that this hill is rich in herbs containing very rare and precious herbs all over. Legend has it that, as per the direction of Lord Indra, Aswini Devas came to this place to find some rare herbs and worshipped Lord Shiva here. It is also said that Sage Agasthiyar worshipped Lord Marundheeswarar both at Thiruvaanmiyur and Thirukkachur and enriched his knowledge on Herbal Medicines.

Another unique feature of this temple is the deity Sri Marundheeswarar here is facing west. The outer praakaram is huge and has Dwajasthambha and Nandhi facing east towards the sanctum. The people believe that the soil of this place itself is medicinal (மண்ணே மருந்து) and would cure one from ailments. There is a small pit near Dwajasthambha filled with mud. This mud is considered sacred and medicinal, which devotees apply on their forehead like Vibhuthi. There is a separate shrine for Sri Andhaka Nivarani Ambaal, where She is in standing posture.

Sri Brahma, Sri Durgai, Sri Sandigeswarar and Sri Bhairavar are seen on the praakaram around the sanctum. Sri Sandigeswarar here is seen with 4 heads which is not seen in many temples. He is called Chathurmuga Sandigeswarar. Sri Dhakshinamurthy is present facing south. There is an ancient well at the north eastern side of this temple. This serves as the Theertham for this temple and is called 'Oushadha Theertham'. This water too is believed to have medicinal properties. This well is made in such a way that, one can enter the well and reach up to the surface of water through the steps. This steps start at a distance from the well and goes inside the well even below the water level. It is said that there are 60 steps to this stair case. A very unique and a 'well designed well’.

The Sthala Viruksham for this temple is Palaa Maram (Jack tree). Girivalam is very popular here. Devotees undertake Girivalam on Pournami (full moon) days and Tuesdays praying the Lord, to get cured of their illness. Sundaramurthy Naayanaar, who had visited this village and composed hymns on Sri Kachabeswarar, has sung 2 hymns in praise of Sri Oushadheeswarar too. Thirukkachur is definitely a sanctified place, possessing 3 ancient Shiva Temples