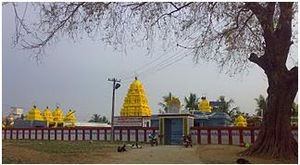 The color of the Vasthram (clothing) meant for Sri Surya Bhagavan is Red. The Dhaanyam (grain) dedicated to Him is Wheat and the auspicious day to worship Him is Sunday. Worshipping Sri Surya Bhagavan on Sunday, by offering red cloth, red flowers and wheat gives success to one in all his deeds. Also, it is said that worshipping Sun God makes one gain Thejas. It is said that, apart from Surya Bhagavan, Sage Agasthiyar too had worshipped Lord Shiva here and hence the name Sri Agatheeswarar. Another Rishi called Vaakeesa Muni also had worshipped Sri Agatheeswarar here.

The temple is built facing south on a vast land. Sri Agatheeswarar is seen facing east. Ambaal Sri Aanandhavalli is facing south and is in a standing posture. Nandhi is seen facing the Lord towards east. Other deities like Sri Ganesha, Sri Dhakshinamurthy, Sri Mahavishnu, Sri Durgai and Sri Sandigeswarar are seen around the sanctum. There is a separate shrine for Lord Ganesha called Raja Ganapathy here. Also, Sri Kaasi Viswanathar and Sri Visaalakshi have separate shrines facing east at the south west portion of the temple. Lord Subramanyar also has a shrine in the temple in which a Maragatha Mayil (Peacock made of green granite) is found.

Sri Kaala Bhairavar is very popular in this temple and is said to be more powerful. Special Poojas and Abishegams are performed to Sri Kaala Bhairavar every Sunday during Raahu Kaalam (4.30 pm to 6 pm) timings. It is said that people worshipping Sri Bhairavar here for 6 consecutive Sundays, get their wishes fulfilled. Many kings have patronized this temple during various periods. A king called Aadhithyan is said to have done renovations to the temple during 878 AD.

Also Raja Raja Chozha I, Raja Raja Chozha II (1152 AD), Kulothunga Chozha III (1188 AD), Sundara Pandiyan (1200 AD), Veera Rajendra Chozha, a Telugu Chozha king called Vijayakanda Gopala are said to have contributed much to the temple, according to the inscriptions found in the temple. According to another inscription, a king by name Sri Vijaya Maharaja of Sumatra Island (Indonesia) is said to have gifted 250 Kuzhi (a unit of land measurement in thamizh) of lands to Sri Agatheeswarar at Kolappaakkam, during the 8th year of his reign. Inscriptions also reveal that Sri Vijaya Maharaja was a contemporary of Raja Raja Chozha and also had very cordial relationship with the then Chozha kingdom. The inscription also gives details about some Buddhist activities nearby to this temple and that Sri Vijaya Maharaja was a Buddhist.

In the recent past, the ASI have explored the area and found ruins of a Buddhist shrine near the temple. A couple of Buddha statues and pillars were discovered near this temple, which is kept in the street sides of the temple. A carving of Lord Ganesha is also found on one of these pillars. Archeologists are of the opinion that Sri Vijaya Maharaja, who visited the Buddhist temple at Kolappaakkam, could have also visited Agatheeswarar temple and made donations to the temple. The Sthala Viruksham for this temple is ‘Arasa Maram’ (Peepul tree) and Theertham is called ‘Amirtha Pushkarani’ (pic above) which is found adjacent to the temple and is not well maintained.

Special days like Pradhosham, Sivarathri etc., are celebrated well in this temple. Devotees throng from different parts of the city during such days. This wonderful temple with great significance is now coming to light gradually.

Kolappaakkam is located about 18 kms from Chennai city. One can take the road which is diagonally opposite to MIOT Hospitals in Ramavaram, off. Mount Poonamallee Road, to reach Kolappaakkam. Alternatively, one can also go from Porur via Gerugambaakkam and reach Kolappaakkam.