The lion is generally considered the king or the monarch of the forest, the animal kingdom. Hence it became a symbol of royalty. The throne of a monarch is usually decorated with figures of lions on either side of the seat as arm-rests. The four legs of the throne may also be shown as resting on crouching lions. Hence it is called sinhāsana. 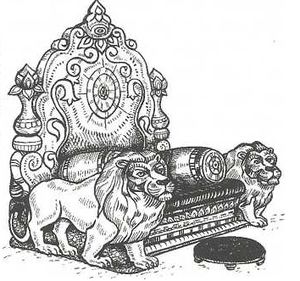 The Mānasāra,[1] a famous ancient work on the religious Architecture, divides the siṅhāsanas into four classes:

These four are used successively by the same king during coronation. Deities in temples also have sinhāsanas.

The one used for daily worship is called nityārcana-simhāsana. The viśesa-siṅhāsana is used on special occasions. The thrones in general are sometimes divided into ten kinds such as:

Though various kinds of siṅhāsanas have been described, the most beautiful one may be chosen for the king or the deity.