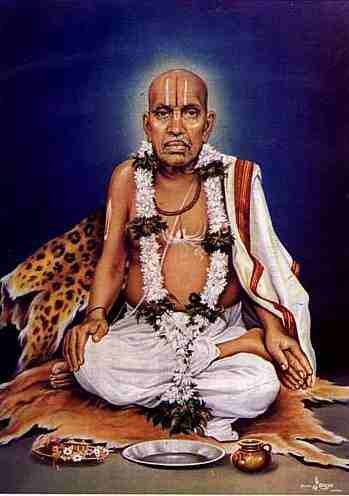 There will be hardly a person amongst the devotees of Shri Sai Baba, who has not heard the name and fame of Das Ganu. Of the two persons, whom Shri Baba deliberately sought early in His residence at Shirdi, Das Ganu was one; the other being Nana Saheb Chandorkar. These two gentlemen were responsible for making 'Baba' a household name in Western Maharashtra, particularly in Bombay City and Thana, Kolaba and Ratnagiri districts. Das Ganu as an itinerant minstrel and Nanasaheb Chandorkar as a revenue official on camp, in the far flung Taluka places, spread the name and fame of Shri Baba in the region referred to above. Whilst performing his Kirtans, it was Das Ganu's custom to exhibit a portrait of Shri Sai Baba on a pedestal before starting his Kirtan and rapidly setting out his experiences of Baba and the miracles He worked, His service to the sick and ailing and how be assuaged the agonies and miseries and helped to solve the temporal and spiritual problems of all, who sought His help.

When Baba first met Das Ganu, the latter was still in service in the Police Force of the then Bombay Presidency. His full name was Ganapat Dattatreya Sahasrabuddhe. He was a Tamasha fan. After a good deal of persuasion, he left the Police Service and joined Baba's band-wagon. The progress then became rapid. By Baba's grace and inspiration, he started writing metrical compositions. Amongst his compositions are (1) Bhakta Leelamrit and Sant-Kathamrit (life stories of modern saints), (2) Ishavasya Bhavartha Bodhini and (3) Sai Stavanmanjari.

Bhakta Leelamrit, cited above, carries three full chapters depicting a glowing account of Shri Sai Baba. Sant-Kathamrit, in its 57th Chapter, sets out in detail Baba's discourse on Dnyana given to Nanasaheb Chandorkar on one occasion. It is a veritable mine of *Advait* philosophy. Ishavasya Bhavartha Bodhini, an elucidation of the substance of Isa Upanishad, was undertaken by Das Ganu for the benefit of Marathi readers, at the instance of Shri Baba. He worked on it strenuously for a long time and had proceeded far into it when doubts began to assail him. He discussed the matter with a few learned and scholarly persons with a view to resolve the doubts. Some of them were dispelled, but not all. A crucial doubt remained unresolved and Das Ganu started smarting. At about this time, he happened to go to Shirdi. Shri Baba, jestingly, inquired about his well-being. Das Ganu bitterly flung back to say that at Shri Baba's instance, he had launched upon the translation of Isa Upanishad, but stumbled on the road and his mind was uncertain whether he had understood the real import or kernel of the Upanishad. Baba then asked him what is his difficulty was Das Ganu explained the difficulty and enthusiastically looked forward to Baba's assistance; but Baba, psychoanalyst and adroit artist that He was, cooly told Das Gunu that his doubt would be resolved by the maid-servant of Kaka Dixit at Vile-Parle, when he would go there. And true to the letter of Baba's words, whilst washing early morning Kaka's household utensils the maid-servant, of tender age, was heard singing a tune which brought a wisp of fresh air, opening the portals of Das Ganu's befuddled mind and the difficulty was resolved. The point at stake was "how human happiness or sorrow arose". Did it depend on external environments or was it embedded in the human mind itself? The ditty sung by the maid-servant who was seen to be dressed in tattered clothes, came out of the fullness of her heart. In other words, happiness or misery is a vritti (modification) of the mind and did not depend on the external conditions impinging on the mind. It is truly said that "mind is its own place and it can make in it a heaven of hell and a hell of heaven".

The other lesson, which Shri Baba wanted to bring home to Das Ganu, was that wisdom was not confined to celebrities; it could as well come from an uncouth, illiterate person like the maid-servant, who was as much the handiwork of God as a socialised celebrity like Shri Baba Himself.

As was the vogue then, Das Ganu, Kirtankar, was, in the early years dressed in a long flowing gown, a dhoti underneath, an uttariya flung across his shoulders and a red turban on his head. Shri Baba assigned to him the fourth Ramnavmi celebrations at Shirdi. The first three celebrations had been carried out without the participation of Das Ganu. The fourth and all subsequent celebrations, till His demise, were the handiwork of Das Ganu. When Das Ganu first participated in the fourth celebration, be was dressed as was his vogue. Before starting the Kirtan, he went to Shri Baba for His blessings Shri Baba sarcastically remarked that he looked like a bride groom in his habiliments. Baba asked him why he came dressed in this fashion. He explained the purpose. Shri Baba ordered him to take down the accouterments which Das Ganu quietly did and placed them at Shri Baba's feet. Shri Baba, simultaneously, reminded him of the tradition of Narada Muni, who strolled the three worlds for his Sankirtans bare-bodied, only in a loin cloth. Ever afterwards, in all weather, Das Ganu performed his Kirtans bare-bodied. He never accepted even a farthing for his Kirtans. Shri Baba's advice and admonition stuck to him through his lifetime. What a transformation!

On the next morning, very early, when Shri Baba took His Mahasamadai, Shri Baba appeared in a dream to Das Ganu, who was then camping at Pandharpur, and told him that His Masjid was in ruins, He was harassed by the oil merchants and grocers at Shirdi and that He was leaving Shirdi for good. Shri Baba then requested him to repair to Shirdi instantly and place plentiful flowers on Him as His last wish.

When soon thereafter, the actual message about Shri Baba's Mahasamadi reached him, he went post haste to Shirdi with a platoon of his disciples. For full twenty-four hours, he and his disciples sang the glory of God's names continuously and placed this figurative garland of God's names on the Mahasamadhi as their humble tribute to Shri Baba, who was the very image of God. Das Ganu passed away at a ripe old age, full of honours, a King among Kirtankars and a cynosure to the eyes of the devout.

The main purpose of this brief article is to bring out how on one occasion Das Ganu was moved to tears by a miracle which Shri Baba worked on him. On one of his several pilgrimages to Shirdi, Das Ganu sought Baba's permission to go to Prayag for a holy dip in the Ganga waters, at their confluence with Jamna and Saraswati at Prayag. The time when he intended to go there was very auspicious; but Shri Baba would not give the permission. Shri Baba told him that such a long and costly journey was unnecessary, as Prayag was where he stood if only he had firm faith in Shri Baba. On this assurance from Shri Baba, Das Ganu instantly prostrated himself on Shri Baba's feet and lo and behold, a trickle of water began to drip from Shri Baba's toes !

Overwhelmed by this graceful miracle, Das Ganu, there and then, spontaneously, composed a song to immortalize this experience. This song shows the high degree of honour and devotion that Shri Das Ganu had for Shri Baba.

An English rendering of this Marathi song is given below for the benefit of those who do not understand or speak Marathi. The song occurs in Chapter 4 of Shri Sai Satcharita written by Shri Annasaheb Dabnolkar, a sincere devotee of Shri Sai Baba.