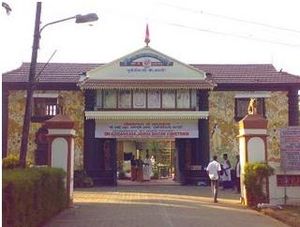 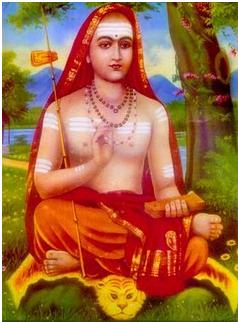 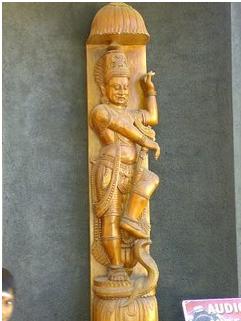 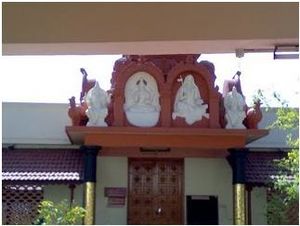 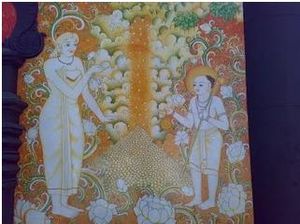 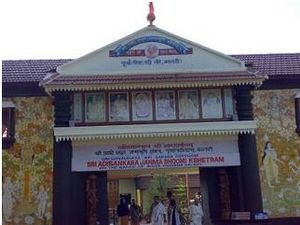 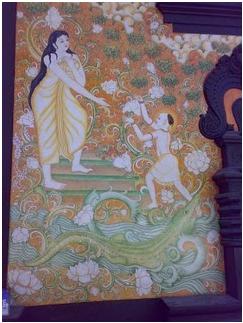 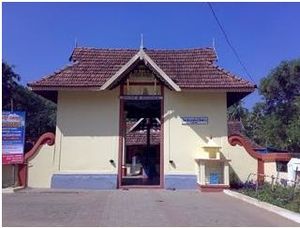 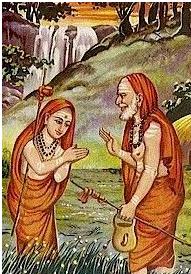 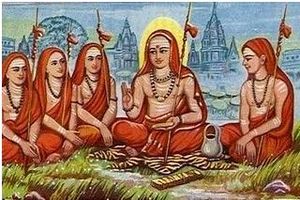 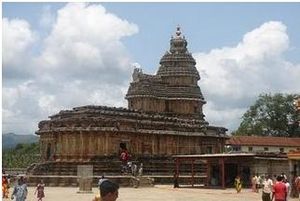 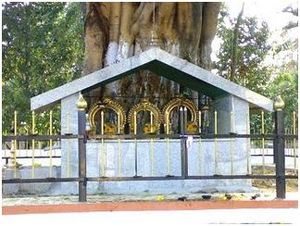 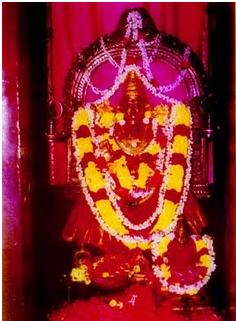 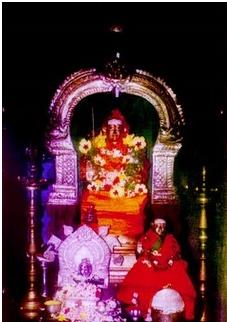 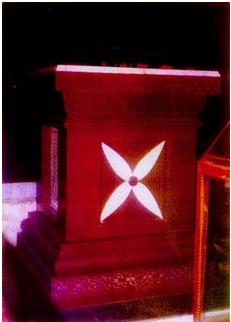 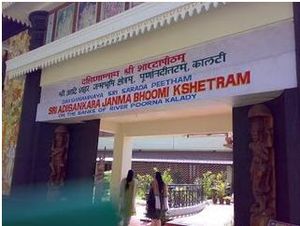 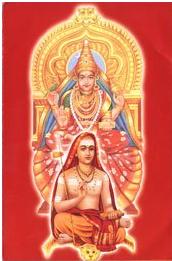 Kaaladi is a very small village located in Kerala, about 1 hour by road from Ernakulam (Kochi). Kaaladi can also be reached by train. Nearest railway station is Angamali. From Angamali, Kaaladi is about half an hour by road.

Kaaladi is the birth place of Sri Aadhi Sankarar, who lived during 8th century BC. There lived a couple belonging to Namboodhiri (a Brahmin sect) family by name Sivaguru and Aryaamba. Sivaguru was a well learned man who excelled in Vedas and Saastras. They lead a happy life but with constant worry that they didn’t have children.

The couple went and prayed Vadakkunnathar (Lord Shiva) at Thrissur for 48 days with fullest devotion. Lord Shiva, who was delighted with their prayers, appeared in Sivaguru’s dream and asked whether he would prefer many ordinary children who will live long or just one intellectual son who will be short lived. Sivaguru humbly left the choice to Lord Shiva Himself, saying that God knows what the devotee deserves.

Lord Shiva was pleased with the attitude of Sivaguru and the Lord Himself chose to be born to the couple. Aryaamba gave birth to a beautiful male child on Aarudhra star and the couple named him Sankaran.

Sankaran grew up as an intelligent child in the village. He started his ‘Aksharaabyaasam’ (Vidhyaarambh or start studying) at the age of 3. Sankaran missed his father at the age of 4. Aryaamba with the support of others in the village performed ‘Upanayanam’ (ceremony to adorn holy thread) to Sankaran at his 5th year, after which he was sent to Gurukulam to learn Vedas and scriptures. Sankaran excelled in everything he learnt and everyone admired Sankaran’s knowledge and wisdom.

As per tradition, Brahmachari in Gurukulam has to go house to house seeking Bhiksha (alms) and has to submit it to his Guru. One day, as part of his everyday practice, Sankaran went on the streets for Bhiksha. He went to a poor woman’s house on a Dwaadasi day and asked for Bhiksha from the door. It was a very small hut, where lived alone a lady without any food for her day. The lady got worried as she did not have any grains at home. Also refusing to offer Bhiksha to a Brahman was considered a sin those days. That was a Dwadasi day and the woman remembered that she had kept a small ‘Amla’ fruit for herself to break the fast on Dwadasi (Hindus observe fast on Ekadasi day and end their fasting on Dwadasi).

The poor woman took out that single ‘Amla’ fruit and offered it in the Sankaran’s bowl. Sankaran got stirred by the selflessness and willingness of the lady by offering the only fruit she had for herself. Sankaran instantly composed and chanted slokas on Goddess Sri Lakshmi and prayed her. The sloka is called ‘Kanakadhaara Sthothram’. Soon after he completed reciting, Sri Lakshmi appeared and poured a rain of Golden Amlas into the lady’s house from the roof.

There was a river by name ‘Poorna’ (today’s Periyar River) which was flowing through this village at a distance from Sankaran’s house. Aryaamba had a practice of bathing in Poorna river everyday and worshipping Lord Krishna (their family deity) at the temple, which was on the banks of Poorna. One day while Aryaamba was returning after bathing, fell fainted. Hearing this, Sankaran went and brought her back home. Aryaamba told Sankaran that she was getting older and not able to walk such a distance.

Sankaran understood his mother’s difficulty and came out of the house, prayed to Sri Ganga Devi and marked a curved line on the ground using the thumb of his foot. As Sankaran was none other than the Lord, river Poorna took a bend and started flowing through the back yard of Sankaran’s house. Even today, if viewed from a height, we can see river Poorna taking a bend near Sri Sankara’s place.

Sankaran completed his Gurukulam successfully and learnt everything with ease. When he was 8, he started participating in debates with scholars and many learned scholars came to meet him to get clarifications. Aryaamba was too happy to see his son to be so wise. She wanted to see Sankaran get married soon.

Sankaran realized the purpose of his birth and wanted to undertake ‘Sanyaasam’ from earthly bondings. But he knew that Aryaamba won’t allow him to be a Sanyaasi as he was her only son.

One day Sankaran was bathing in the river Poorna while Aryaamba finished bathing and was waiting for Sankaran to finish. Suddenly, a crocodile caught hold of Sankaran’s leg and he started screaming out of pain. Sankara tried much to get relieved of his leg from crocodile’s mouth, but couldn’t. Aryaamba screamed for help and prayed God to rescue her son.

Sankaran told his mother that his life is short and only if she allows him to become a Sanyaasi he can get relieved of himself from the crocodile. Aryaamba didn’t know what to do. She got reminded of Lord Shiva’s boon to Sivaguru. But Sankaran said only if he becomes a Sanyaasi, his lifetime would get extended because Sanyaas is like another birth. Aryaamba only wanting to see her son alive promised that she would allow him to undertake Sanyaas. The crocodile set Sankaran free.

Aryaamba was too worried about Sankaran undertaking Sanyaas, as he is the only son who is responsible to cremate her after death. Sankaran with mother’s blessings prepared himself to be a Sanyaasi. He also promised his mother that during her last days he would personally come back home and perform the rites, though being a Sanyaasi.

When Sankara set to start his divine journey, heard a heavenly voice of Lord Krishna. The voice told him that, as the river Poorna was diverted in a different direction and the temple then was not in the right place it meant to be. It also directed him to install the idol and the temple in proper location on the banks of the river. Sankaran took Lord Krishna’s words and re-installed Lord Krishna’s idol on the banks of Poorna River before he left the village. Even today one can see the Krishna temple on the banks of river Poorna which is located near Sri Sankara Mutt.

Though Sankarar took Sanyaas by himself, he went in search of a Guru who was required to initiate him formally as Sanyaasi and to guide him through his new mission. He traveled across the country and reached the banks of river Narmadha. When Sankarar reached there, Narmadha was gushing out with heavy floods, which he felt would affect the people. Sankarar with his divine power collected the gushing water into his Kamandalam (a small container in which Sanyaasis carry water for Pooja) and poured it on the banks. Immediately Narmadha stopped flooding wildly and started flowing gently.

Sri Sankarar reached ‘Kaasi’ (Varanasi) where he stayed and worshipped Sri Kaasi Viswanathar and Sri Annapoorni Devi everyday. He also started explaining Vedas and Saastras to people there. His fame spread across the country. Sri Sankaraacharya got many good disciples.

One day while Sri Sankaraacharya was walking down in a narrow lane towards Ganges, a Chandaala (one who performs cremation -சண்டாளன்) came opposite to him. He was seen with his wife and having 4 dogs. Sri Sankaraacharya saw him obstructing his path and told him to keep away. The Chandaala asked Sankara “According to the principles you practice, the Jeevaathma and the God are one and the same. If so, how am I different from you? When Aathma is the same in everyone, how do you ask me to keep away? Or how do I keep away from myself? Should I keep my body or my Aathma away?”

Sri Sankaraacharya was shocked to hear such words of wisdom from a Chandaala and realized that he is none other than Lord Shiva. He also realized his ignorance and instantly conveyed his obeisance through a composition of 5 Slokas called “Manisha Panchakam”. Before he could finish reciting, the Chandaala vanished and Lord Shiva appeared to him with Goddess Sri Visalakshi and the 4 dogs appeared as 4 Vedas.

Sri Sankaraacharya won over him and made him His disciple. He also paid respects to the wife of Mandana Mishra as Goddess Saraswathi. He walked down towards south and wanted to establish his Mutts in few places. At one place He found that a snake was holding shadow as an umbrella for a frog and he decided that it was the place where He wanted to establish an Aashram, because of the fact that even the enemy animals were supporting each other in that place. Also a sage called Rishya Sringar had his Ashram during Ramayana period, in that hill station called Rishya Sringa Parvadham.

This place is known as Sringeri where He installed and worshipped Sri Saradha Devi (who was Sarasawani) there and formed a Mutt. It is called Sringeri Sri Saradha Peetam today.

One fine day He realized that His mother Aryaamba was in her death bed and rushed to His village Kaaladi. He met His mother there and chanted Slokas for her peaceful death. But later realized that she was afraid of the Shiva Ganas who came to receive her and chanted different Slokas so that Aryaamba’s soul would depart without fear with chants of Sri Maha Vishnu Slokas.

After the death of His mother Aryaamba, the native villagers didn’t allow Sri Sankara to perform the last rites as He was a Sanyasi and didn’t allow him to the burial ground for cremation. Sri Sankara cremated His mother in the back yard of their own house and started His divine journey around the country.

It is said that even today in Kaaladi, people cremate their dead in the family in their own back yards.

Thus Sri Sankara traveled across, spreading His philosophy to nook and corner of this holy country. He was the one who ended the Kaapaalika way of worship and initiated 6 ways of worships (called Shanmadham – means 6 religions or ways of worship) among the people. The Shanmadhams taught by Him were Souram (Surya worship), Saaktham (Shakthi worship), Gaanaapathyam (Ganesha worship), Kaumaaram (Lord Muruga worship), Saivam (Lord Shiva worship), and Vaishnavam (Lord Vishnu worship).

Also while traveling across this country He installed Sri Chakras at various temples to bring down the fierce of Sri Shakthi including Maangaadu in Tamilnadu (Chennai).

He is said to have gone towards north and performed penance at the Himalayas during His last days and attained Moksha. Also there is a belief that He spent His last days at Kanchipuram where He formed another Mutt (Ashram). He is believed to be an incarnation of Sri Dhakshinamurthy (Lord Shiva) Himself. Like Kanchi and Sringeri, Sri Sankara formed the Mutts in few other places in the country.

Sri Vedha Purusha (a huge Vedha Book) is kept in the temple and is worshipped.

A wonderful Mutt which is also a temple, with Vedic chanting throughout the day quenches the thirst of the soul.

Sri Sankara’s service to the mankind, this country and our religion is unmatchable and unimaginable. If we do the poojas or rituals in any of the temples at present, all those ways of performing them were formulated by Him and followed by generations. Sri Aadhi Shankara has composed many hymns and Slokas including Bhaja Govindam which is soul stirring. His Maathru Panchakam tells about the importance of mother.

Sankara Jayanthi and many other festivals are celebrated with pomp at Kaaladi Shrine. Kaaladi is a very peaceful and blissful place in God’s own country, which must be visited at least once in the lifetime.