Buddhist Brāhmans have been several in number and have been well known in scriptures and history for their contribution to Buddhism from the time of the Buddha. Some like Sariputra and Maudgalyayana were the Buddha's disciples, while some like Bodhidharma were missionaries spreading Buddhism beyond India. Others like Asvaghosa were poets; others like Chandragomin were grammarians. Both Sramanas and Brahmans (whether Sramana or not) are important in terms of spirituality.

There were also several other Brahmans who were not Buddhist but did contribute to the religion and its community.

At the time of Gautama Buddha, there were 2 types of Brahman clerics; Priests and paravrajakas (monks.) The monks were further divided into 2; categories Karmandinas and Parasarinas. Buddha discusses in Majjhima (3, 298), the opinions of a certain Parasariya and that it is probable this Parasariya was a member of one of the two orders.[1] Parivrajaka orders that were not strictly Brahman were 'Annatitthiya' ("Those of another school.")[2] These orders not strictly for Brahmans were listed in the Brahmanda Purana called Sakyas (Buddhists), Nigranthas, (Jains), Vrdhasravakis, Jivaskas, and Karpatas. 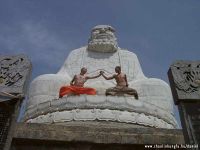 Statue of Bodhidharma constructed in commemoration by Emperor Wu. Bodhidharma was a monk of Pallava royalty and had established the Shaolin Temple and founded Kung-Fu. 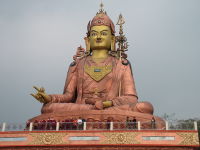 Padmasambhava of Sahor (Himachal Pradesh) had traveled outside of India and had taught the dharma to many. This in Sikkim is the largest statue of him.

Many of the best-known Buddhists were Brahmins. They include Gautama Buddha's chief disciples Sariputra and Maudgalyayana, Vasubandhu and Mahakasyapa (founders of Mahayana Buddhism); Nagarjuna[3] and Asvaghosa,[4] the reformer of Theravada Buddhism; Buddhaghosa (founder of Vajrayana Buddhism; Padmasambhava, founder of Tibetan Buddhism; Shantideva, author of Bodhicharyavatara (The Way of the Bodhisattva); Bodhidharma, founder of Zen Buddhism and Kung Fu and Kumarajiva, both of whom brought Buddhism to China and beyond; Nagasena, the debater of Milinda Panha; Manjushri, mentor of Ashoka and Radhaswami, the person who brought Ashoka to Buddhism, and scholars of Nalanda such as Aryadeva and Shantarakshita, who taught Buddhism and new doctrines.

People born in Brahmin families feature extensively in Buddhist Tripitakas, and are found among the Buddha's chief disciples. The "Brahmana-Varga" (section on Brahmins) in the Dhammapada lists the Buddha's views on Brahmins.[5] Peter Masefield writes, "The canonical texts show the early Buddhists seeking their sustenance mostly from Brahmin families, and the dhamma-cakkhu (the insight into the Four Truths) that led to liberation was given almost exclusively to men of Brahmin descent."[6] Gurmukh Ram Madan states, "Also brahmans appear to have been taken up; but they were the distinguished representatives of a cultured laity - a secular strata of nobles who formed the majority of Buddha's disciples".[7]

A Buddhist layman, Jayadeva of Bihar, was imprisoned when the Odantapuri Buddhist learning centre was attacked; he advised a group of monks in Nalanda of the Muslim threat, and helped them flee to safety.[8]

To add to Asim Chatterjee's statement, when Devadatta was making his order's monks believe that Gautama Buddha lives in luxury and abundance, it was Sariputra and Maudgalyayana's preaching that the misinformted monks left and became Buddhist monks.[10]

From the Jatakas that mention the twenty-eight Buddhas prior to the Gautama Buddha, it is clear noted clearly that seven are Brahmins. They are Dipankara (the first Buddha), Mangala, Revata, Anomadassi, Kakusandha, Konagamana, and Kasyapa.

There have also been Brahmin Buddhists monarchs, including Brahmin-family dynasties which were almost exclusively Buddhist:

In the Buddha's own times there were some monarchs that accepted his doctrine. In the Vinaya Pitaka (I, 3), the Buddha is meditating in a forest shortly after his enlightenment when a storm arises; the Naga King Mucalinda shelters the Buddha from the storm by covering his head with his seven snake heads.[49] The king then assumes the form of a young Brahmin, and gives homage to the Buddha.[49]

There were many ministers of dynasties throughout India and abroad that made it their mission to propagate Buddhism. In Cambodia there is an edict stating that King Jayavarman and his son Rudravarman built a monument dedicated to the Buddha, and appointed a Brahmin to protect it.[50]

Several Buddhist texts have been written on the subject of Brahmins:[51]

The Buddha gives a sermon on who a true Brahman is, written in the "Brahmana-Varga" chapter of the Dhammapada.[52] Being Buddhist and of the Brahmin caste the, Buddhist Brahmins proved themselves as Brahman by deeds, as did many non-Buddhists.

Early Buddhist scriptures describe orthodox Srauta Brahmins as different from the Sramana philosophies by practices such as sacrifices, although Gautama Buddha admires the five key attributes that were mandatory for Brahmins.

Five attributes of Brahmins from the Majjhima Nikaya:[53]

These five are mentioned in the Taittiriya Upanishad 1.9-11.[54]

When Santati (the minister of Koasala's King Pasenadi) died, some Buddhist monks debated whether Santati should be considered a Brahman or a Sramana. The Buddha declared that he is both:

Even though a man be richly adorned, if he walk in peace,
If he be quiet, subdued, restrained and chaste,
And if he refrain from injuring any living being,
That man is a Brahman...a Sramana...a monk.

While at the same time it is possible to be of the Brahmin-caste and Sramana, it is also possible to be Brahman (by actions) and a Sramana. The Maha-Assapura Sutta illustrates that it is possible to be both of Brahmin caste and a Sramana. In this sermon (originally preached in Assapura, Anga), the Shramana tradition is explored; followers should be conscientious, scrupulous, pure in deed, word, and thought, guarding the senses, moderate in eating, vigilant, mindful, self-possessed, striving to put off nivarana and cultivating Dhyana. According to the scripture, such a person may be called a nahataka, vedagu, sotthiya, ariya, arhat, Shramana or Brahmana.[56]

Lord Buddha is said to be a descendant of Sage Angirasa in many Buddhist texts.[57] Scholars like Dr. Eitel connects it to the Rishi Gautama.[58] There too were Kshatiryas of other clans to whom members descend from Angirasa, to fulfill a childless king's wish.[59] Angirasa is also a sage whom Buddha honors in the Mahavagga.

Some scriptures refer to Buddha as a Brahman by his merit. An example is given in Nagasena's Milinda Pañha wherein Nagasena tells a story of Buddha claiming to be a Brahman and a king.[60] According to Buddha in the Assalayana Sutta the Brahmana (not just belonging to the Brahmin caste) category is the best of people, although it depends on karma.

Buddhism not a nastik doctrine[edit]

According to Buddhist texts, Astikavada (Astika Path) is also known as Sabbathikavada.

Although Buddhists have been branded by orthodox or mainstream Hinduism as Nastika, the Buddhists themselves denied that status. For example, the Madhyamika philosopher Chandrakirti, who was accused of being a nastik, wrote in his Prasannapada that emptiness is a method of affirming neither being nor non-being and that nihilists are actually naive realists because they assume that things of this world have self-existent natures,[61] whereas Madhyamikas view all things as arising dependently within the context of casual conditions. Bhavaviveka declares that Buddhists are not nastika by refuting the nihilists annihilation of 'karmaphalasambandha' and demonstrating the transmigration of sentient beings.[62]

There were also Buddhists that were accused of believing in ideas outside of the Buddha's teachings, and they were called nastika in the "Bodhisattvabhumi" (a section of the Yogacarabhumi by Asanga) and the scripture also declared they should be subject to isolation so their views do not infect the rest of the Buddhist community.[63] Like the Manusmriti, the "Bodhisattvabhumi" also criticizes the nastika for reliance on logic only.[63]

Some Buddhist scholars went against nastik doctrines. For example, Nagarjuna wrote in his Ratnavali,[64] that nastikya (nihilism) leads to hell while astikya (affirmation) leads to heaven. According to the Sallekha Sutta, belief leading to evil conduct is of three kinds, and natthika ditthi (nastikavada or nihilism), is one of them (the others being ahetuka ditthi or accidentalism and akiriya ditthi or the view of inaction).[65]

In the Buddhist Vinaya Pitaka of the Mahavagga (I.245)[66] section the Buddha pays respect to Angiras by declaring that the Veda in its true form was declared to the Vedic rishis "Atthako, Vâmako, Vâmadevo, Vessâmitto, Yamataggi, Angiraso, Bhâradvâjo, Vâsettho, Kassapo, and Bhagu"[67] and because that true Veda was altered by some priests he refused to pay homage to the altered version.[68]

According to Gautama Buddha (Vinaya 1.23-35), the Fire Sermon or "Adittapariyaya", the true fire sacrifice ('agnihotra') is internal and insists on removing the three fires of passion, hate, and delusion within oneself to succeed in this penance.[69] Buddhist scholar Tadeusz Skorupski linkens this to the three metaphorical fires to other allegorical ones in the Manu Smriti (2.231) wherein "Tradition holds that one's father is in fact the garhapatya fire, one's mother the daksina, one's teacher the ahavaniyal that triad of fires is the most important."[70]

As there were several Brahmins in history after Gautama Buddha that were Vedic scholars and accepted Buddhism, according to Jatakas and other Buddhist literature, there were Buddhists that were educated in Vedas.

Among the notable nagas of Buddhist tradition is Mucalinda, protector of the Buddha. In the Vinaya Sutra (I, 3) the Buddha shortly after his enlightenment is meditating in a forest when a great storm arises, but graciously Naga King Mucalinda gives shelter to the Buddha from the storm by covering the Buddha's head with his 7 snake heads.[49] Then the king takes the form of a young Brahmin and renders the Buddha homage.[49]

One of the seven female forms of Avalokitesvara will be of a Brahmin woman.[71]

Lord Indra took the avatar of a Brahmin to test whether Bodhisattva Sadaprarudita was pure enough to become a Buddha.[72] Indra also took the form of an old Brahmin to save Queen Maddi from being married to Prince Vessantara.[73]

On the advice of a Naga king called Suvarnaprabhasa, Nagaraja Elapattra assumed the form of a Brahmin and went round the cities of India promising a lakh of gold to anyone to who could interpret the enigma pronounced by the Buddha.[74]